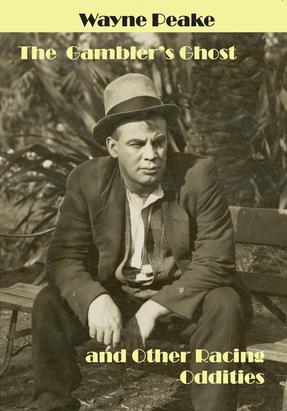 Reviews of The Gambler's Ghost

'Prose and poetry writing on the topic of horse racing has hardly been a neglected subject in Australia. Legendary names such as: Nat Gould, Frank Hardy, Henry Lawson and 'Banjo' Paterson are up towards the top of a lengthy list. Often the works from the list will be found to contain humour and examples of racecourse language or argot.

None, however, could be considered to have approached the levels of entertaining diversion and the use of the vernacular achieved by Wayne Peake with The Gambler's Ghost. Most of the slang in the work is easily followed but, in any case, there is a good glossary of terms at the end.

No one should open the book looking to find literary work to the standard of Gustav Flaubert or Ernest Hemingway. Readers though should expect to find ready parallels with humorists such as Damon Runyon and Lennie Lower.

The opening tale in the book will also bring to mind crime and mystery personalities like Agatha Christie's Hercule Poriot, and Cliff Hardy from Peter Corris.

This is a work well capable of serious enjoyment for all. Well at least all those in the set from regular punters through to those that can recall that horses named Phar Lap and Black Caviar won some races.'

'There has been something of a rush of horse racing fiction books published in Australia over the last few years. That’s not something we have been used to. None of them have been humorous short stories though, which is an imbalance Wayne Peake has chosen to correct with his new book being released in October.

The book contains five short stories of racetrack intrigue and downright ill-starred misadventures which will have you chuckling and incredulous. I suspect there might even be a touch of first-hand experience among the yarns.

This book is a paradigm shift for Wayne, who is the author of the brilliant and scholarly 2006 book Sydney's Pony Racecourses. Perhaps after the intense research and study for that book some levity and lightness was needed. That has been achieved in this thoroughly recommended release.'

Five fantastic tales of humorous fiction set on the racecourses of Sydney and New South Wales, stretching from the rough and ready pony tracks of the 1920s via Rosehill in the swinging sixties to a bunch of desperate punt-drunks at Randwick in the 1980s.

What are they like? Perhaps imagine a collaboration between PG Wodehouse, AB 'Banjo' Paterson, Lennie Lower, Jay Cranley (Good Vibes/Let it Ride) and Geoffrey Chaucer (in 'Miller's Tale' mode) writing about some Australian racing 'tragics' with more ardour for horseracing than skill in picking winners.

In these stories you will meet characters who love the punt so much ‘they would have marched across the Simpson Desert barefoot if the nearest race meeting was being held at Coober Pedy.

The stories convey the pleasure and excitement of going horse racing in Australia in the high summer with the cicadas singing. Several plots entwine key events and characters from Australian horse racing history. Each story deploys and indeed celebrates the endless possibilities of the language of racing and its contribution to Australia’s vernacular and figurative language.

Among other thing they show how entirely a love of racing can absorb the smitten, and the sheer joy the anticipation of going to the races brings and the exhilaration that comes with arriving on course - even though what follows might prove a financial disaster!