The Peakes of Peakhurst (an extract from Chapter one of Wandrin' Star: Wild Jack Peake of Peakhurst)

My father Jack Peake’s ancestors had lived in England, possibly in Middlesex. He told us they had been tea merchants. Sir Robert Peake, a printmaker and royalist during the English Civil War, may have been an ancestor. If that were true he had decidedly different political views to Jack, who generally referred  to members of the Royal Family as ‘bludgers’ and ‘chinless wonders’, and Her Majesty the Queen, Elizabeth II, as ‘old slack-box’. In 1980 Jack’s aunt, Nellie (‘Daisy’) Bell nee Peake, told a local newspaper that her family had been pioneers of the Sunday-School movement in England in the seventeen-eighties. She had taught religion herself on the Sabbath Day at Peakhurst for much of her adult life (and between times in her youth had been a standout player at the ‘Braeside’ Lawn Tennis Club of Peakhurst). Her nephew Jack proved to be one of her less enthusiastic recipients of the word of God.

The first of Jack’s direct ancestors to have the good fortune to reach Australia, a convict born in England about 1768, was also christened John Peake. In February 1808 at the Old Bailey, London, he was sentenced to 14 years transportation. He arrived in Sydney on 29 September 1811 aboard the ship Admiral Gambier and was soon assigned to work in the store of Rowland Hassall, the Parramatta merchant and preacher, after whom Hassall Street Rosehill is named. If Peake were a criminal, at least he had been ‘sent down’ (under) for one of the more artistic mal-disciplines: of counterfeiting bank notes, (he was a printer by trade). This was a cut above the typical convict misdemeanor of pinching a loaf of bread or a handkerchief, or bunging a rock through some toff’s bay-window. Many of twentieth-century ‘Jack’ Peake’s clandestine activities also possessed this redeeming feature of creativity. John Peake the Elder seems to have remained, or reformed to be, a man of religious sensibilities. In November 1813 he purchased a weighty family bible for the considerable sum of eleven-shillings-four-pence. There is circumstantial evidence that a Jane and Sarah Peake, who were issued pardons in 1808 and 1809, may have been relatives of his. His daughter, born in 1819, just months after his death, was christened Sarah Jane.

There are several notices in the Sydney Gazette that identify John Peake as a supplier of fresh beef to the government during the Macquarie administration. There are also some mentions of him in Hassall family correspondence held by the Mitchell Library. These indicate that he was not a very popular man, and ultimately he lost Hassall’s favour, while ‘everyone else has long hated his way’. In 1819 a member of the household wrote that ‘old Mr. Peak’ [sic] cannot live long’. The informant proved a good judge, as Peake became deranged and was removed to Hassall’s stables near Prospect to die. He obliged on 23 May 1819, aged fifty-one. This first Antipodean Peake is buried at St John’s Church, Parramatta. His wife, Elizabeth Allcock, who had arrived in Sydney in 1793, took herself and their children to her father’s property.

The Peakes of Peakhurst

One of these children was John Robert Peake, who was born in 1815. He worked mainly as a sawyer in adult life, but also built boats at Oatley and Lime Kiln bays on the Georges River and, for a time, at Jervis Bay.

In 1838 John Robert Peake purchased 10 acres of the McCaffrey estate at Gannon’s Forest from James Pithers, probably a relative of his son Jacob’s future wife, Elizabeth Pithers. He did not occupy this holding until 1851. The homestead he built was opposite where modern-day Jacques Avenue, Peakhurst, joins Forest Road. In 1855 he donated a quarter-acre for a Wesleyan chapel. He was eager to offer an alternative activity on the Sabbath to the chain of wine shanties and grog shops that existed in the district.  Later, he advocated the establishment of a provisional school for the district and the education inspector suggested it be called the ‘Peakehurst’ School.

The subsequent dropping of the middle ‘e’, through clerical error, from ‘Peakhurst’ was a major pain in the backside for me as a young boy. It made it difficult to convince narkish school-mates of my family’s claim to the district. It is also true there were other local settlers with bigger holdings in Peakhurst, which they had settled earlier. They probably had better claims to the naming rights—but ‘stiff cheddar’ to them.

The original wooden ‘Peake’s Chapel’ was replaced by a sandstone edifice in 1879. This was a few hundred yards up Forest Road near Bonds Road, on the opposite (western) side. This was closer to the centre of the settlement. Until 1976, when Forest Road was widened and the Peakhurst Methodist congregation moved to Lugarno, on the sandstone pillars before the chapel were three granite stone memorials each dedicated to a son of John Robert Peake, each of whom had been its warders. The 1909 foundation stone, laid by Mrs Isaac Peake for the Peakhurst School of Arts, may still be read near that location, across Forest Road.

John Robert Peake later acquired 137 acres between Stony Creek and Forest roads Hurstville, bound by Gloucester Road and Dora Street. He died on a portion of his land there, (possibly at modern-day numbers 51 or 138 Gloucester Road), in 1886. This estate passed to some line of his offspring other than Jack’s forebears, who in a generation or so were living close to the poverty line.

Even if a bit lucky to get naming rights for ‘Peakhurst’, the Peakes were of course a well-known family of the district. They were often in the news, albeit sometimes regrettably. In the Sydney Morning Herald of 14 July 1882 this item appeared:

We are informed that another of the family of Mr. [John] Peake, at Peakhurst, George's River, Emma Peake, aged 27, died of fever on the 10th instant. A later report from the medical officer states that the rest of the family was progressing favourably.

Emma had succumbed to the dreaded and ghastly typhoid fever.  Another member of the family had died from the same cause days earlier. That was Elizabeth Peake.

Two brothers of Emma, James and Jacob, served on Hurstville Council, and Jacob was for a time mayor of Newtown.[11] Another brother, Jack’s great-grandfather Isaac, seems to have spent most of his time, when not farming, in litigation. He took a man to court, accusing him of stealing a horse from his homestead, ‘Holleyview’.  The homestead was located on the corner of Forest and Stony Creek roads, about a kilometre north from John Robert Peake’s original dwelling. He lost the case.[12] He was also the plaintiff in a law suit that lingered from 1884 to 1888. Earlier, immediately after their wedding, he and his wife Martha had lived at Billy Burton’s shack, a residence I have been unable to identify. Isaac later acquired his own property, which was famous for a massive Port Jackson fig tree in the grounds.

In 1887 Isaac and his brother Jacob provided a strip of their holdings for the extension of Stony Creek Road to Forest Road.  Isaac’s home after his retirement in 1917, ‘St Elmo’, was on Forest Road where it now intersects Wattle Street. This was just up the road from his son George’s property, ‘Braeside’.

Another sensational paragraph concerning a member of the Peake family appeared in the Sydney Morning Herald on 29 February 1904:

‘STABBED IN THE SHOULDER’

George Peake, living in Forest-road, Peakhurst, was admitted to Prince Alfred Hospital last night suffering from a severe wound in his left shoulder. He states that on Friday night he quarrelled with a man, and received a stab in the shoulder.

The victim was almost certainly Jack’s grandfather, George Isaac Peake, though there were other members of the family, an uncle and a cousin, with the same Christian name, living in Peakhurst. If the knifing victim was Toby, he was at least compensated for this assault in a sense by a literary career. Late in life he reflected engagingly on life in the Georges River district in the second-half of the nineteenth century:

The sight in the springtime on the river banks was something to be remembered. Christmas bush and bells waratahs, boronia, flannel flowers, and bulbs of all kinds. The rock-lilly and stag-horns were very abundant.

The lags mostly went for burning charcoal and a good game it was too, but they destroyed some splendid timber. When they had made a bit of money they went to the nearest shanty, and spent the lot and perhaps left burning to waste for if you don’t attend to the coal while burning you will get none.

There were plenty of sly grog shops. They sold mostly rum and made it themselves. The stills were across the river where they could get running water.  Some of the old chaps were good hands at making it and many a cask found its way to Sydney.

Everything indicates John Robert Peake was a total abstainer though he and wife Esther often entertained the noted bon vivant, New South Wales Premier Henry Parkes. As the naming of his sons, (Isaac, Jacob, Thomas, etc.), indicates, John Robert was a god-fearing man. In fact, he was a strictly adherent member of the Methodist church, that ascetic protestant sect for most of whose members alcohol was the Devil’s brew and anathema.

Although he was also nominally a Methodist, my father Jack was neither god-fearing nor an abstainer. He would have put on a couple of kegs rather than a tea party for the consecration of the church, if he’d been in charge of entertainment. For, without doubt, somewhere between John Robert and John Alfred a number of the Peakes of Peakhurst had abandoned wowserism for the fast life. They had also, through the marriage of Annie Maud Peake, (a daughter of Isaac Peake and thus Jack’s great aunt), to John Hannon, attached themselves to one of the wealthiest families in the Georges River district. Ironically, years later, Jack drove trucks for the Hannon family firm. His boss at Hannon’s Yard was ‘Wick’ Hannon, who was nearly seven-feet tall. Wick was a throw-back to another of the Hannon clan, Bob, who was even taller. When a young man, Bob had been exhibited at the Sydney Easter Show as the ‘The Canadian Giant’. Strangely, Bob’s best mate was an unusually short man known as ‘Tidger’ French. Tidger himself was a forebear of one of Jack’s close mates, Basil French.

Jack’s grandfather, George Isaac Peake, had three children. The eldest, Sydney George Isaac Peake, was Jack’s father. The distinction of having first wandered, even if temporarily, from the narrow Methodist path in life, onto a side-track—an alternative route to Paradise that Jack was to follow so enthusiastically during his own time on earth—lies with one or the other of these. Being knifed on a city street suggests that George Isaac may well have been associating with the demimonde, so maybe the laurel belongs to him. Anyway, it is evident from the limited information available that it was they, much more than any of his earlier forebears, that most influenced the character of this atypical Everyman, my father. 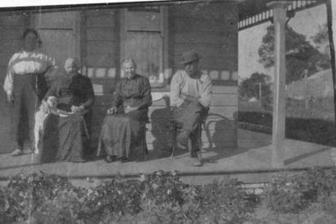 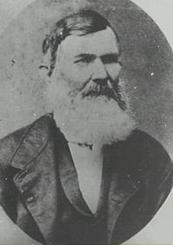 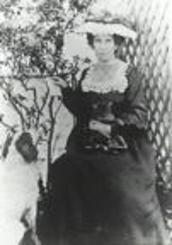 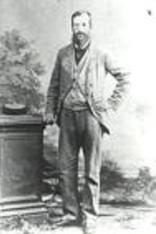 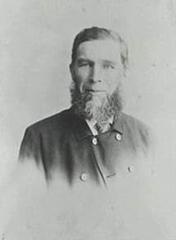 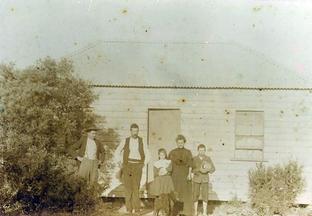 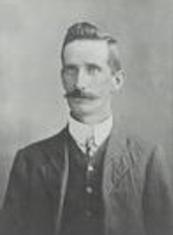 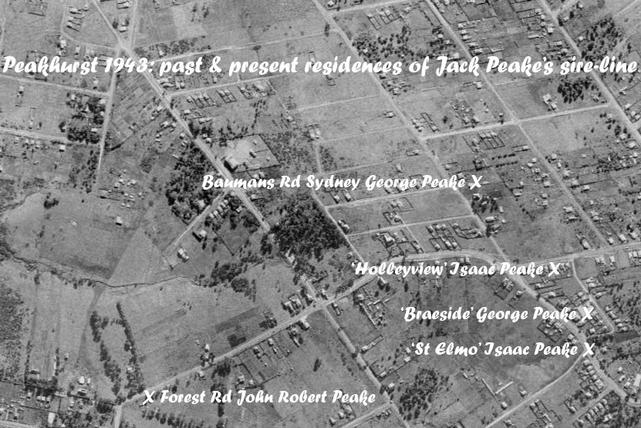 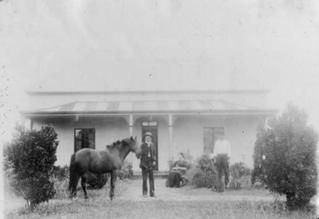